Agata Marta Soccini, a researcher at the Institute of Computer Science at the University of Turin, is one of those computer scientists who it would be a shame to limit between a 0 and a 1, because, as she explains, “one never arrives at meritorious projects by following a track, but by constantly searching for connections”.

After studying computer science and social technologies for three years in Milan, Agata fell in love with Virtual Reality and its unlimited possibilities to create worlds that do not exist. This passion led her to Turin to specialise in “Computer Science – Virtual Reality and Multimedia”. At the same time, she received the leaflet that changed her life; thanks to it, she discovered the Talenti Neolaureati project of Fondazione CRT.

So Agata won a one-year scholarship at the Gnomon School of Visual Effects in Los Angeles, one of the best schools in the industry, and began her long journey to universities and research centres all over the world, from Venice to London, from Hollywood to Tokyo.

Today Agata is a reference in the field of Virtual Reality and all its connections, from art to rehabilitation and space exploration.

To find out more, we asked her to tell us her story.

How has the scholarship at the Gnomon School in Los Angeles impacted your career?

To call it a “scholarship” is an understatement. Thanks to Fondazione CRT’s Talenti Neolaureati project, I was able to attend one of the most important special effects schools in the world, an irreplaceable passe-partout for people like me who want to work in this field. I studied and worked in Hollywood for a year in direct contact with the most successful professionals in the industry, including Disney director and Oscar winner Gore Verbinski. Today, in my courses at the Virtual Reality Degree Programme at the University of Turin, I teach the same methods I learned at Gnomon, putting first the narration of real case studies from Film History. Moreover, I learned to master VR in all its applications, even outside cinema: in space exploration, for example, a sector I studied professionally at Thales Alenia Space and the University of Turin for the European Space Agency (ESA), also participating in the launch of the Exomars mission to Mars.

How do you get a lander to Mars?

Space missions are almost always a one-shot deal, meaning they have a single chance of success, with everyone putting everything on the line: either you win or you lose. Each mission is unique and requires prototypes, simulations and extremely precise calculations where nothing can be left to chance. This is where VR plays a key role, processing the vast amount of information gathered by countless instruments and elaborated with the help of many disciplines – from atmospheric forecasts to data collected by sensors. The power of Virtual Reality is to bring all this information together and help us understand how we might deal with an environment that does not exist or that we can not explore first-hand, such as the soil on Mars.

Rehabilitation and VR: How can we heal ourselves with Virtual Reality?

I have been leading a team of Masters students and interns to develop experimental neurorehabilitation techniques for post-stroke patients, i.e. stroke patients with specific movement problems. Three of the active projects are in collaboration with the ASL in Turin, the Faculty of Medicine of the University of Parma and the National Institute of Informatics in Tokyo. Our task is to understand how an algorithm that can respond to the patient’s stimuli can move a virtual body – the “self-avatar” – and how the patient, observing his virtual body, can respond positively by moving the injured part of the physical body. A movement that would otherwise be unthinkable.

You have also followed research projects at the Fondazione Prada and exhibited conceptual work related to VR, such as GAM. What contribution can Virtual Reality make to art?

Virtual Reality is art, with its own identity and aesthetics. Man is a visual animal, and he reprocesses everything he sees. If we think of the enormous fascination that cinema exerts on us with a two-dimensional projection, we can easily imagine how much immersive 360° technology with the possibility of direct interaction can offer us. What can we expect from Virtual Reality in the near future? Virtual Reality – or rather Extended Reality (XR), which includes VR – is ready to enter our daily lives. The launch of the Metaverse is certainly a great sign to help us understand the direction we are heading: soon we will all be ready to try out its content but more importantly, to participate in their production, both at work and in our personal lives. We cannot be caught off guard.

Who would you recommend to participate in a Fondazione CRT Talents project? 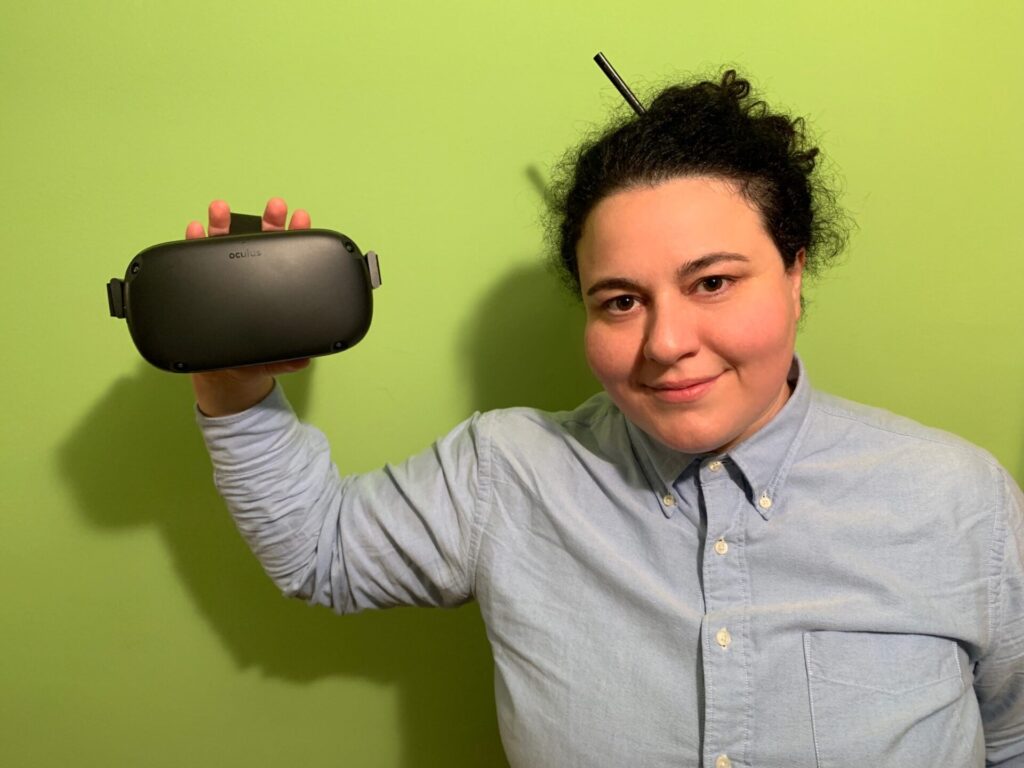