500 days to revive the marble front of Palazzo Madama, one of Turin’s symbols of excellence in the world. The largest restoration project for a public asset in the heart of the city will restore the Juvarra façade to its former splendour, thanks to the synergy between two institutions: Fondazione Torino Musei, which has always been committed to the protection, conservation and enhancement of museum heritage, and Fondazione CRT, Palazzo Madama’s historic and main private supporter (16.6 million euros allocated in total), which is fully financing this latest project with an extraordinary commitment of 2.4 million euros.

Approved by the Ministry of Culture and Soprintendenza Archeologia Belle Arti e Paesaggio (Superintendence of Archaeology Fine Arts and Landscape), the restoration and structural consolidation work combines art, engineering and research, safeguarding the identity and history of the site with innovative, sustainable and reversible technological solutions.

The construction site has started on Monday 14 March, under the direction of arch. Gianfranco Gritella, with the consultancy of engineer Franco Galvagno for the structural works. The execution is entrusted to the companies Cooperativa Archeologia of Florence and B.P. Benassi of Montignoso, winners of the contract awarded by Turin Museums Foundation for an amount of 1,065,476.85 million euros.

“At last we are off! The great construction site for the rebirth of the façade of Palazzo Madama is a complex gear, a system operation that looks to the future by bringing together a multiplicity of technical, professional and economic resources for a common goal: we must all be proud of it”, say the President of Fondazione CRT Giovanni Quaglia and Secretary General Massimo Lapucci. 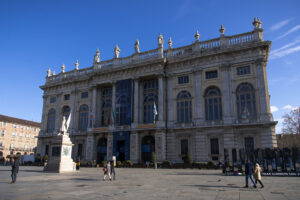 A lift will take the workers up to the top of the cornice for the more complex works related to the structural safety of the entire marble trabeation.

Inside the cavities in the large cornice, specialised workers will build special curvilinear steel structures, destined to form the future load-bearing skeleton of the stone cladding of the large architrave, which has been showing signs of structural fatigue for centuries: following the detachment of some fragments, it was necessary to start the major restoration work.

At the top of Palazzo Madama, the four imposing allegorical statues, each weighing 3 tons and 4 metres high, “signed” by the sculptor Giovanni Baratta from Carrara in 1726, will be removed from their plinth – using a special technique that employs a steel wire similar to the system used to extract marble blocks from quarries – and temporarily lowered to the ground in steel cages, with a spectacular crane system, for their restoration and consolidation in a special pavilion.

The intervention, in its various phases, can be followed “live” by the public, who will also be able to visit the pavilion itself at pre-established times.

For the first time in centuries, the marble chosen by Filippo Juvarra in the ancient quarries of Foresto and Chianocco, located in the lower Valle di Susa, will again be used for the most delicate and deteriorated parts of the structure.

The restoration of the statues, as well as those of the wooden frames, will be entrusted through two further call for proposals in the coming weeks, to complete the first lot of work on the central sector of the façade: the conclusion, after 500 days, is scheduled for 24 June 2023, St.John bank holiday, the city’s patron saint. Two further lots on the two side sections will follow.

Watch the video presentation of the restoration and consolidation works 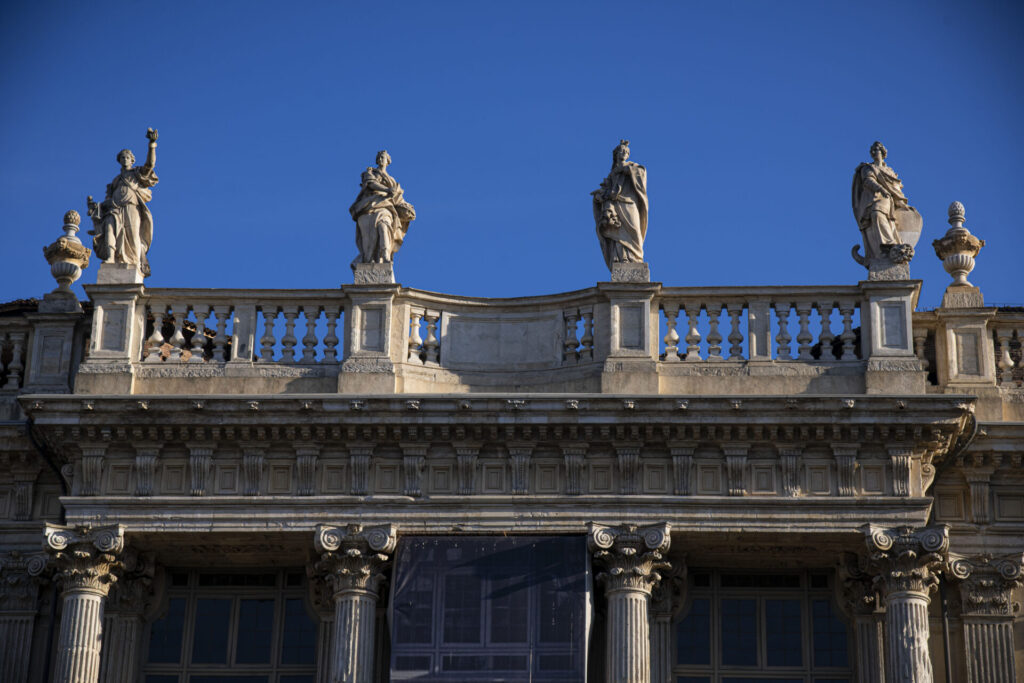