Damon Zucconi’s “Counting Frame” wins the OGR Award: it is the first digital work in the collection of the Fondazione Arte CRT and will be exhibited at the OGR Torino.

At the award ceremony held at OGR Torino on Wednesday 9 March 2022, Damon Zucconi of VEDA gallery in Florence was announced as the winner of the fourth edition of “OGR Award” promoted by Artissima and Fondazione per l’Arte Moderna e Contemporanea CRT.

In this edition, OGR Award was in dialogue with Surfing NFT, the project debut of the Beyond Production platform, with which Artissima and Fondazione per l’Arte Moderna e Contemporanea CRT launch an annual reflection on the most innovative trends in contemporary art.

In 2021, the focus was on the phenomenon of NFT. The winner was chosen from five artists selected by an international committee at the last edition of Artissima. Each of them received a production grant to create a digital work recorded on the blockchain with Non Fungible Tokens.

The winning NFT work “Counting Frame” (2022) by Damon Zucconi will be acquired by Fondazione per l’Arte Moderna e Contemporanea CRT and become part of its collection. The collection, which has always focused on historical works, is opening up to NFT for the first time.

This is the reason: “The jury unanimously awards Damon Zucconi, represented by the gallery VEDA in Florence, for the way his NFT evokes the history of calculation through the abacus, a physical object transformed into something immaterial, reminiscent of our world made of bits and codes. There is something surreal about the way this work brings together the first abacuses the viewer sees with their own eyes and the digital ability to calculate infinitely large numbers, emphasising the different ways we ascribe value to numbers. In “Counting Frame”, Zucconi uses the abacus to combine contemporary ways of seeing, producing and distributing with ancient techniques and tools. The abacus becomes hypnotic, enchanting and captures our attention in an endless loop.

Damon Zucconi, “Counting Frame”, 2022. still image from a web application. Courtesy of the artist and VEDA, Florence The jury also wanted to give a special honourable mention to Matteo Nasini from Clima Gallery in Milan, explaining as follows: “The artist is a master of the digital art of rendering, transforming a high-resolution and seemingly small image into something that allows us to experience the universe, making Nasini a ‘builder of worlds’”.

The OGR Prize was established to recognise the artist who best reflects the complex and challenging relationship between art, technology and innovation, with a focus on digital developments. In its fourth year, the prize stands alongside Surfing NFT.

Thanks to the support of Fondazione per l’Arte Moderna e Contemporanea CRT, an institution of Fondazione CRT, and in collaboration with technical partners Artshell and LCA Studio Legale, professionals specialised in both digital technologies and legal issues related to NFT, Artissima offered the five selected artists the opportunity to produce a digital work registered with the NFT on the blockchain and to view it on a platform tailor-made by Artshell and dedicated to the project, without being obliged to sell it through the traditional process of exchanging cryptocurrency.

Fondazione per l’Arte Contemporanea CRT has provided each artist with a budget of 8,000 euros for the production of the work and will purchase the winning piece. Surfing NFT has three innovative strengths: it has been developed in a specific context that focuses on the quality of the work rather than its exchange value; it also involves galleries and emphasises their intermediary role; it pays special attention to the issue of environmental sustainability through a platform that selects a sustainable blockchain model in terms of energy savings: Polygon, the most powerful of the POS (Proof of Stake) technology platforms, that uses 0.1% of the energy required by Ethereum and other POW (Proof of Work) cryptocurrencies.

Anna Ferrino, President of Fondazione per l’Arte Moderna e Contemporanea CRT said “Fondazione per l’Arte Moderna e Contemporanea CRT is opening up to NFT. I am delighted to congratulate Damon Zucconi, winner of the fourth edition of the OGR Awards: Counting Frame, created with Non Fungible Token and Blockchain technology, will now become part of our historical collection and will be made available to the OGR. This prestigious award not only underlines the strong synergy that links Fondazione Arte CRT with Artissima and OGR, but also represents the final stage of a challenge that began last autumn at the Turin fair, when Ilaria Bonacossa proposed that we support the Beyond production conceptual platform. This resulted in Surfing NFT, a groundbreaking project that is in line with the mission of Fondazione Arte CRT, which has always been at the forefront of exploring new experimental creative frontiers. On my own behalf and on behalf of the entire Foundation, I would like to thank Artissima for their great commitment during these months and I look forward to continuing on this path together with the new director Luigi Fassi, just as I am grateful to our great technical partners Artshell and Studio Legale LCA and to the jury of the international selection committee for the professionalism with which they evaluated the works. Finally, I would like to thank the gallery owners and artists who took this bet with us and who accomplished their work with unprecedented commitment and passion”.

The event on 9 March was preceded by two encounters titled “Surfing NFT – Road to OGR Award”: 13 January 2022 called “Is the Art World Ready for NFTs?” with Domenico Quaranta in conversation with Serena Tabacchi and moderated by Ilaria Bonacossa (recording here); 14 February 2022 called “Galleries go NFTs” with Margit Rosen in conversation with Johann Koenig and moderated by Ilaria Bonacossa (recording here). In the first three editions, the prize was awarded in 2017 to Rokni Haerizadeh, presented by Galerie Isabelle van den Eynde in Dubai; in 2018 to Tomás Saraceno, presented by Galerie Pinksummer in Genoa; and in 2019 to Yuri Ancarani, presented by Galerie Isabella Bortolozzi in Berlin.

Damon Zucconi (1985, Bethpage, NY) lives and works in New York. Zucconi works with custom software and scripts to create works that are usually accessible online. Lists, sequences of numbers, simulations, words, calendars, books, images and websites become materials. Forms are disassembled and reassembled in the wrong order or with subtle changes. In this way, he shifts the focus to the processes used to create meaning, rather than the content that a form might signify in itself. His recent solo exhibitions include: Lithromantic at VEDA, Florence (2020), Imagine a World Without You at JTT, New York (2019).

The OGR Award is a prize offered by Fondazione per l’Arte Moderna e Contemporanea CRT as part of Artissima Internazionale d’Arte Contemporanea. The award, now in its fourth year, aims to acquire a work (submitted by the galleries that participated in the last edition of Artissima) that represents the complex and challenging relationship between art, technology and innovation, with a focus on digital developments. 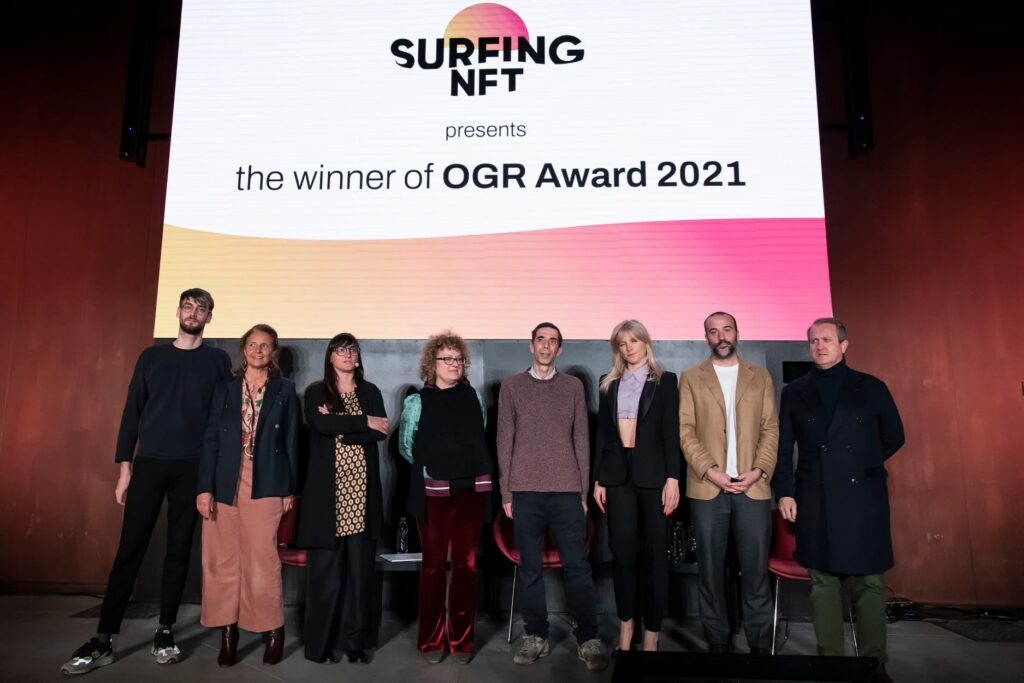